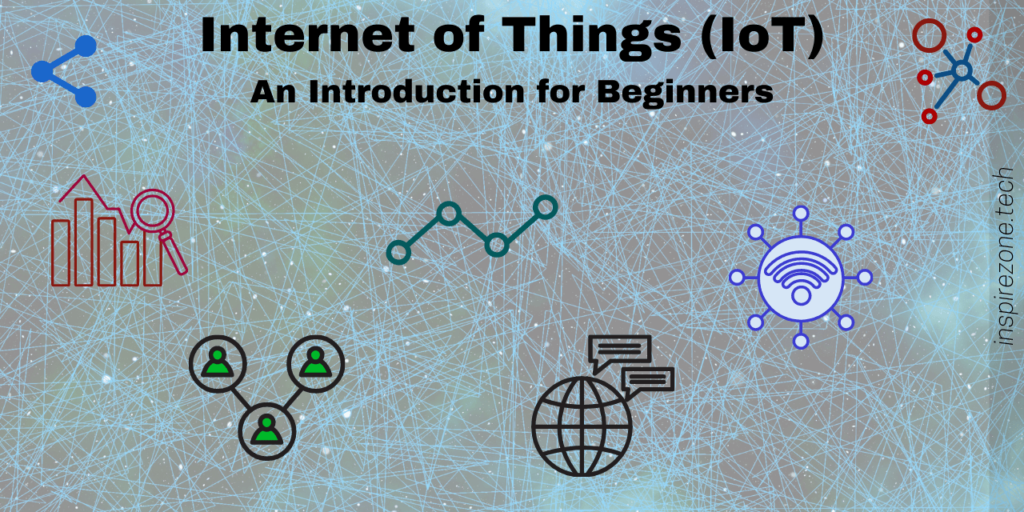 The Internet of Things (IoT) describes technology that enables interaction with devices through the medium of the internet.

The concept of IoT allows people to connect with the “things” in our environment. Connectivity improves awareness of our surroundings and provides a means to save time, money, be more efficient and solve a particular set of problems.

The ability to control devices in our homes with the touch of a button on our phones while miles away from home is not something that was commonplace a few decades ago. This is just one basic concept providing an introduction to IoT and its capabilities.

This article is a beginner introduction to IoT that will explain its core concepts and provide real examples of where we can see IoT in effect today. We’ll also discuss the unique challenges faced by IoT systems and envision the role IoT will play in the future technology landscape.

As a simple definition, IoT describes a network of devices connected to the internet and to each other.

As the concept of IoT continues to dominate the industry, we see more common devices becoming “connected” which is changing the way we interact with the things around us.

IoT makes objects around us “smart” with concepts such as a “smart home” or “smart city” enabled by the emergence of IoT ecosystems.

In a smart home application, someone on the bus home from work can use a mobile app to activate their home thermostat so the house will be heated to their liking on arrival.

In a smart city application, several air quality sensors can exist around the city that monitors pollution levels of the area. Data from these sensors can be used to plot a map of which parts of the city are facing high levels of air pollutions.

The above are examples of how connectivity between devices over the internet can transform the accessibility and efficiency in how we handle the things around us. 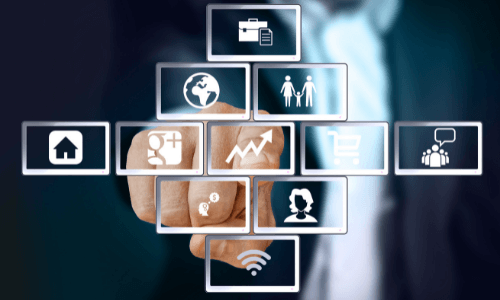 An IoT network consists of one or more physical devices capable of transferring data within the network in order to obtain data or perform a certain function.

An IoT network will usually have the following main components:

These are the objects placed with the job of collecting information from our environment or performing a specific action. They can be sensors that monitor and collect data, for example, a room occupancy sensor detecting if people are in the room. Or the device can be used to provide easy access to a function, for example, all the lights in a house switching off from a single button on a mobile app.

Wireless mediums are the means that make any IoT network connected.  Each device in the network possesses a method of connecting to other components of the IoT system through a wireless protocol. Forms of wireless connectivity can include Wi-Fi, Bluetooth, Cellular, Zigbee, Sub-1 GHz and so on. Any device with a form of wireless communication can become part of an IoT network. 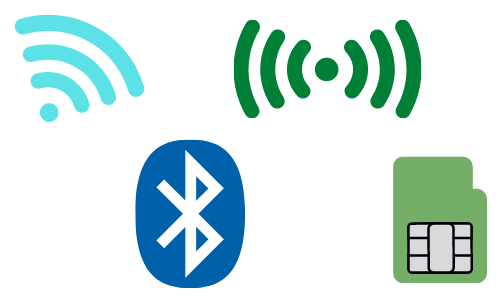 The term “IoT” was first coined by Kevin Ashton in 1999. It originated front the concept of using RFID (Radio-Frequency Identifiers) on objects to allow computers to identify and manage things.

As technology evolved, IoT began to emerge as a term to describe devices that enable smart functions of the things around us. The definition of IoT continues to expand and includes enabling more common objects and involving the use of several wireless technologies.

IoT now acts as a general term encompassing devices and systems that are able to exchange information between them.

We interact with IoT enabled technologies every day in our homes and towns and cities, some of which are more obvious than others.

Here are some examples of IoT applications at work around us. 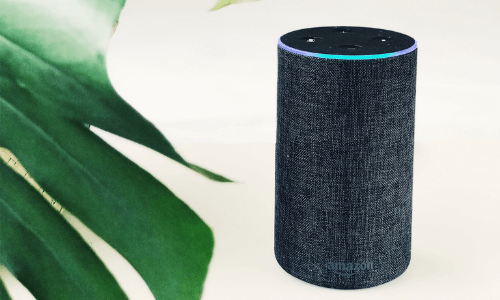 A smart home assistant switches of all lights in a house after receiving a voice command.

Your home doorbell alerting you when someone rings it no matter where you are in the world.

A water leakage sensor placed in a utility room altering you there’s a high presence of water because your washing machine leaked.

A car providing real-time feedback to the driver on engine health and performance.

A hospital using a sensor on each bed to know when a patient has gotten up.

An elderly patient using a wearable watch that sends data back to their carer on their mobility and heart rate. This will provide information to indicate if the patient might be in distress.

Rooms in a hospital using smart occupancy detection to determine how may people are in a room and for how long, to let facility management know when a room is due a deep clean for contamination control. 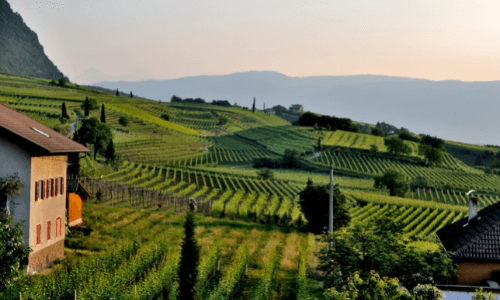 A restaurant monitoring temperature of freezers to ensure food stock is always within a set temperature range to avoid food spoiling.

A farmer uses various sensors to analyse the conditions of crop fields and real-time health monitoring of livestock.

A city using sensors to monitor air and water quality around the city to ensure the readings are within acceptable levels.

A building equipped with occupancy detectors so lights in a room will be switched off automatically if no one is present in the room.

A security camera detecting the presence of an intruder in a building during the night and sounds an alarm alerting the security company.

The above are just a handful of example applications driven by the concept of IoT. The number of applications continues to grow as we see more devices and sensors becoming IoT enabled.

In 2020 there was an estimated installation of 31 billion IoT devices with this number expecting to grow to 35 billion by 2021 (source).

The nature of IoT brings new challenges to systems engineering. These challenges scale up as the number of connected devices also scale. 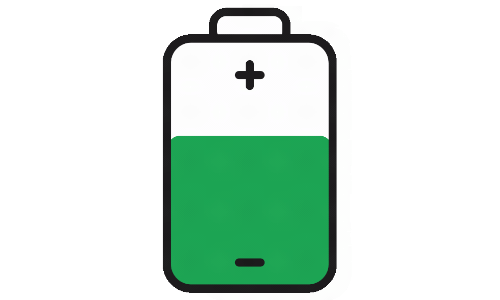 Most IoT networks consist of sensors that gather data from their surroundings. These sensors are often placed in hard to reach areas. Like several temperature sensors located throughout a building, ideally, there must be no restriction as to where the sensors are placed to allow an accurate representation of the overall building conditions.

As a result, many IoT devices are battery powered rather than mains powered. This allows freedom in where they can be placed. There are several challenges that come with making IoT sensors wireless and portable while ensuring a low enough power consumption to last reasonably for the type of application.

An application that highlights the importance of power management is the example of a wristband sensor for remote patient monitoring. In this case, it’s more critical that such a device will have sufficient battery life so it does not need to be replaced unexpectedly. If such an application were to fail due to loss of battery capacity, it can be potentially life-threatening to the patient being monitored.

The design of IoT devices is heavily linked to embedded systems engineering which must address the challenges associated with prolonging the life of IoT devices and sensors. The components of an IoT network are essentially made up of embedded devices as each connected device will contain a processor enabling its smart functions.

Embedded hardware and software design are core to the development of IoT technologies that meet the demands of the application while staying within reasonable power consumption limits. 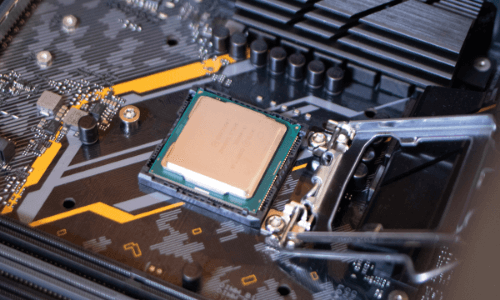 This refers to the ability to acquire and process any information or data present on an IoT network at a reasonable rate. The processing capabilities matter for both the devices and the central server carrying out the logic and decision-making.

Speed of processing matters to ensure the IoT system is capable of carrying out its functions in time reasonable for the application. In cases when the data being monitored is safety-critical, there will be more emphasis placed on making sure the network has sufficient bandwidth to attend to anything serious.

Sensors gather real-time data on their surroundings and these sensors send information to the server which is likely located on the cloud. When batch processes of data from hundreds or even thousands of sensors are involved, the scalability of the cloud system matters to ensure it is suited for the applications. 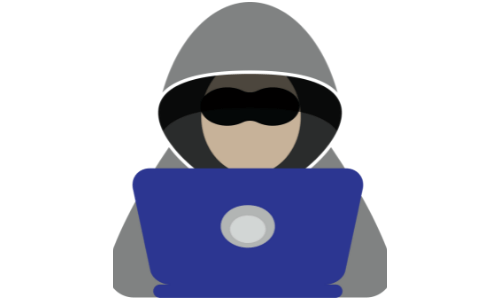 Central to any IoT ecosystem is data. Usually, this data is collected from environments that involve individuals or groups of people and so care must be taken to ensure data is kept for the appropriate end-user application.

While data storage is one side of security in IoT systems, the overall security of the components of an IoT ecosystem also presents another challenge.

IoT networks generally consist of several nodes including sensors, devices and may contain one or several processing servers.

A secure IoT network will ensure each component in the network is secure when treated as individual components and also when it is part of the entire IoT network.

Hackers will target the ‘weak points’ of a network which are often exposed to a hidden weakness in the network. IoT architecture faces challenges to ensure no ‘backdoors’ exist that can be used by an intruder to get access to a part or whole of the network.

These numbers scale up in large IoT ecosystems such as infrastructure where entire cities can be connected through a vast web of inter-connectivity.

Data leakage and hacks are becoming increasingly commonplace as more and more devices we interact with are becoming connected through IoT.

The health industry is one that has seen several breaches, with sensitive patient data retrieved from hospitals. With more IoT sensors being used for healthcare purposes, there is an even greater concern about such personal health data ending up where it should not.

The Future of IoT

We are becoming more connected and the concept of IoT and its application is only continuing to expand with a surge of both existing and upcoming technologies now being made for IoT specific purposes.

Increasingly more devices are capable of being connected to an IoT ecosystem ad enabling smart functions and data analysis.

IoT is now becoming central to driving sustainability and is a critical factor in determining how utilities and infrastructure will be able to keep up with the increasing demands of economies. 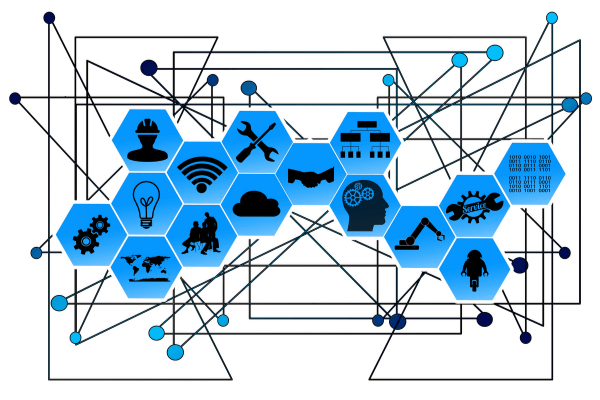 IoT is usually depicted as the disruptive technology for solving most of present-day society issues such as smart cities, intelligent transportation, pollution monitoring, and connected healthcare, to name a few. – source

This has lead to a subset of IoT known as Industrial IoT (IIoT) that encapsulates connectivity at an industrial scale. This category of IoT presents its own unique challenges that come from serving large industrial and enterprise ecosystems.

IoT is now a key factor in overcoming several economic challenges of today. This includes monitoring the quality of basic utilities such as water, air pollution monitoring in cities, traffic management, waste management to helping to manage the increasing demand of the healthcare system in hospitals.

Overall, IoT plays a major role in evolving the technology landscape of tomorrow.  From improving comfort and accessibility in our homes to leading the way in providing innovations to our infrastructures.

IoT is the technology of today that allows us to be connected to the world around us. Connectivity makes way in improving how we interact with objects in our everyday lives as well as improving quality of life through smarter management of the infrastructure of towns and cities.

This introduction to IoT highlights how we are all involved in the technology and provides examples of where IoT is very present in areas we might not be familiar with.

Has this introduction to IoT made you more aware of the IoT devices you interact with? What thoughts or concerns do you have about a more “connected” world? Let us know in the comments!

Compelling reasons why python is popular with developers in 2021

What programming language should I learn first? 3 key factors to consider