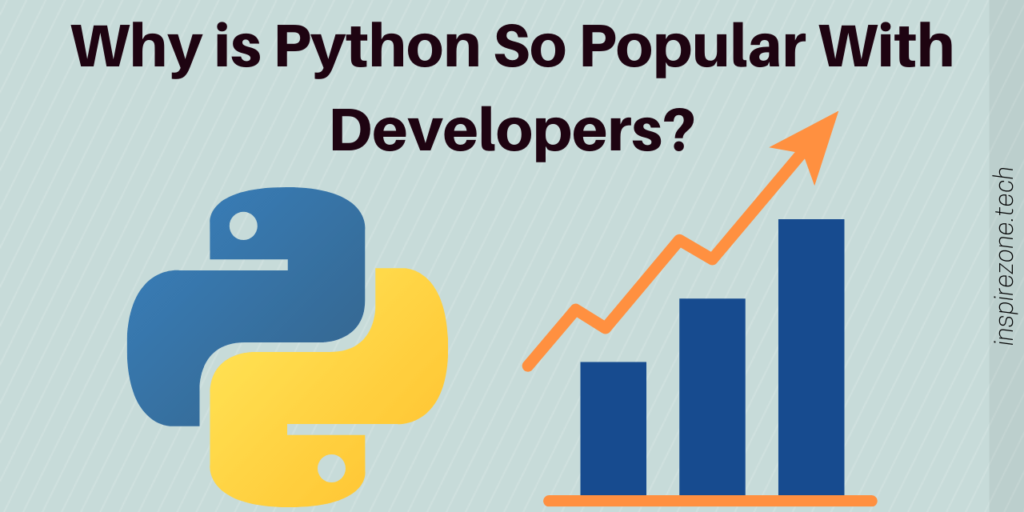 Why python is popular is down to several combined advantages it has over other programming languages that has allowed it to dominate.

Developers love Python, and with each year that goes by its popularity only seems to increase even further.

To understand why Python is popular we need to take a look at why many see it as such a great language to learn. We’ll also discuss why every developer should at least consider picking up the language in 2021!

How do we know Python is popular?

Let’s start with addressing the statement made in this article. This is probably not the first time you’ve heard of Python’s popularity. But how exactly do we know that Python dominates as a language?

Well, the statistics speak for themselves. Let’s take a look at some data that proves the popularity of Python.

The TIOBE programming community index is a measure of the popularity of programming languages based on analysis of results from various search engines.

TIOBE declared Python as the programming language of the year for 2020. This means according to their analysis, Python increased the most in popularity in 2020.

TIOBE also maintains a rating of each programming language, which (as of January 2021) Python ranks as third overall, under C and Java.

PYPL (Popularity of Programming Language) is another index created from analysis of searches. However compared to TIOBE, PYPL focuses on searches from Google Trends only.

PYPL lists Python as the number one language as of January 2021. Again, this indicates in 2020, Python was the most popular language. They also explicitly make a statement on Python’s popularity:

In the 2020 stackoverflow survey, Python appeared number 1 as the most wanted language. This represents the number of developers who don’t use Python but would like to.

In this same survey, Python also appears as the third most loved language which indicates you’re likely to continue to use the language once you’ve started.

In the 2020 GitHub survey, Python was ranked second as the language that dominated overall. GitHub also shows Python has remained in the top three language spot over the past 6 years.

All these sources show Python is highly recognised as an important programming language by  today‘s standard. All the more reason why developers should acknowledge its significance in the software industry and consider picking it up at some stage.

Probably a key reason for Python’s growth in popularity is its low barrier of entry. The syntax of Python is more straightforward to read and write compared to other languages. Python also comes pre-installed on Linux systems and is easy to set up and install if needed.

If a language is considered easier to learn, then more developers will likely put time into picking it up. The simplicity of Python also means it’s great for beginners and Python is widely considered a good choice as a first programming language to learn.

The low barrier of entry is definitely one of the major reasons for Python’s popularity and why more and more developers are using it.

Python is known for its use for many different types of software applications. Some of these include machine learning, robotics, automation, astronomy, web development, embedded systems, data science, image processing and game development.

These are just some of the types of applications that Python can be used for. You name any application you can think of and it’s very likely there’s some way to develop it with Python!

Python’s dominance as a programming language can also be seen from several organisations that choose to use Python to develop their world leading software. According to this article; Google, Dropbox, Quora, Netflix, Facebook, Instagram, Spotify and Reddit all use Python for their development.

With such flexibility in what Python can be used for, it becomes clear why python is popular and likely will remain so in the near future.

The structure of the Python language allows it to be hugely extensible through the form of modules, libraries and framework.

Python is powerful because it takes a lot of the hard work out and rarely will an application need to be developed from scratch. There are Python implementations for many applications which programmers can use in development of their software.

Just like the saying “There’s an app for that”, when it comes to mobile phones. Well when it comes to Python, there is a Python implementation out there for nearly every application you can think of.

You should get the picture by now. Python already contains modules, libraries or frameworks which do all the hard implementation for you and essentially allows you to create your application by putting building blocks together.

The provision of existing code in Python for many different types of applications is definitely a solid reason for the continued growth of Python’s attractiveness as a programming language.

There are two main areas that show how supported Python is from both developers and organisations.

If a language isn’t well documented, it’s unlikely to be popular. Hence one of the reasons why Python has remained popular is due to being a well organised and documented programming language.

Support from community and organisations

As mentioned previously, Python is used to develop many word-class level software applications created by large organisations. As a result, the Python language has received various levels of support from support organisations themselves to keep it relevant. See this list from python.org showing some direct sponsors of Python.

Why python is popular can be clearly seen from what we’ve covered in this post. Python is known for being both highly flexible and having a low barrier of entry for those new to coding. It can be used for a large variety of applications and is also widely supported and loved amongst developers and organisations.

Regardless of your level of experience, If you’re considering a new programming language to pick up Python is certainly a choice you can’t go wrong with!

Are you currently using Python and what are you using it for? Comment below!

Checkout other articles you may be interested in below: